This is the official home of the inaugural national grassroots movement to enact the anti-bullying Healthy Workplace Bill (HWB) in U.S. states. Its goal is to prevent and correct abusive work environments in American workplaces (see Features below).

The HWB is the boldest proposed change to U.S. employment law in 50 years. Current discrimination and harassment laws rarely address bullying concerns. Though bullying is more harmful to victims’ health than sexual harassment, it is still legal in the U.S. People deserve more protection against arbitrary cruelty than existing nondiscrimination laws afford.

Suffolk University Law Professor David C. Yamada, an employment law specialist, wrote the HWB. The Workplace Bullying Institute (WBI) network of volunteer citizen lobbyists has successfully had the bill introduced throughout the U.S. The map below charts the history and progress of the HWB movement since 2003 as it has been effectively opposed by the well-funded business and human resources (SHRM) lobbyists.

Details about the Workplace Bullying phenomenon can be found at the WBI website.

Features of the Healthy Workplace Bill 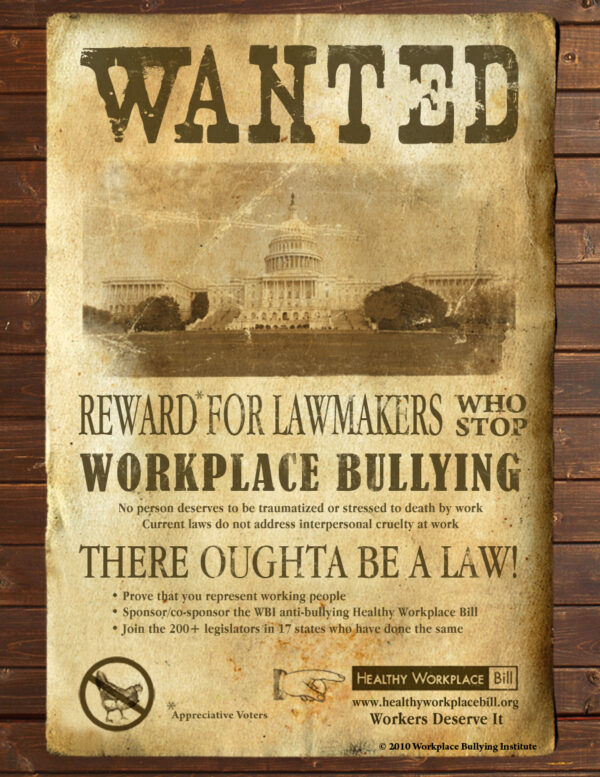 31 States Have Introduced the HWB

The purple states have previously introduced the HWB.  The dark blue states have passed training-only mandates for all employers (California) or state-only employers (Utah). COVID-19 has disrupted normal legislative activity. If movement does take place, it will be described here. At the start of the 2021-22 two-year legislative session in most states, the HWB has been introduced in Massachusetts and West Virginia. A strong policy-mandate version of the bill has been introduced in Georgia.

On Aug. 7, 2020, the PR governor Wanda Vázquez Garced signed into law “Act to Prohibit and Prevent Workplace Harassment in Puerto Rico” (House Bill 306). Without doubt, this law is the closest to the WBI Healthy Workplace Bill that has been introduced in 31 other U.S. States. “Workplace harassment” is defined as malicious, unwanted, repetitive and abusive, arbitrary, unreasonable and/or capricious behaviors by employers, his (sic) agents, supervisors or employees oblivious to the employer’s legitimate business interests that create an intimidating, humiliating, hostile or offensive work environment not suitable for a reasonable person to perform their duties or tasks in a normal manner. One corporate employment law firm said the bill passed despite strong employer resistance. State lawmakers should find the same courage the PR lawmakers did. Ignore whiny employers who think they have to bully to manage.

Features of the law are discussed here.